Back to the HVPS User Interface

To produce a finite number of cycles (burst of pulses), use the following configuration: 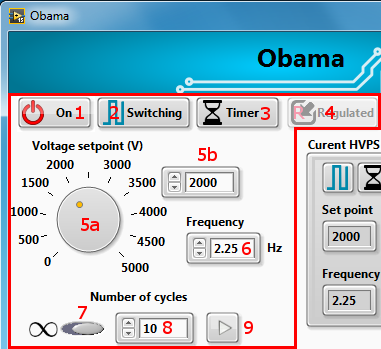 Configuration to generate a finite number of switching cycles

If the button (1) is on, a series of cycles is being made, and you can follow the progression on the Current HVPS parameters part of the interface. Once the series of pulses has been made, the HVPS turns off, and button (1) reflects this by being set to the off state. There are 3 ways to restart a new series of pulses once the HVPS has finished the previous series:

While a series of pulses is being made (button (1) is on), pressing on button (1) to turn the output off pauses the generation of pulses (0V at the output). When you press (1) again, the HVPS resumes the burst of pulses where it was paused. You can also press on your keyboard space bar if the interface window has the focus to toggle the state of button (1).

If you change the number of pulses in control (8) while the HVPS is producing a burst of pulses, the counter will restart from 0 up to your newly defined value.