Check out the schematics, and assembly instructions. 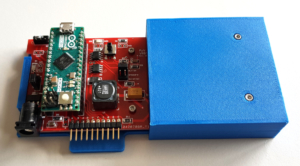 What is new in this version?

There is no modifications on the functionalities of the board. However, the previous version of the PCB had a bill of material relying on different suppliers, and with parts that were not necessarily available in every country. This revised PCB has a bill of material based on products from Digikey, and the BOM file has consequently been updated to reflect this change. This includes the power adapter with multiple sockets, to make it useable in most countries. The only components that need to be purchased from another supplier are the two HV optocouplers, but they can be sourced easily from VMI and distributed worldwide.

The power jack has changed location, and consequently, the full enclosure will not work with the new board. We will update the design in the near future. However, we have added STL files to produce a minimal enclosure with a 3D printer.

We have also added PCB files and a list of components to make the low-voltage tester used during the assembly of the board, so that you don’t have to make one using prototyping boards. You can simply have this PCB made at the same time that you order the main HVPS PCB.

And stay tuned, as we will release a new version of the interface in the coming months. There will be a lot of new features for the Python interface.